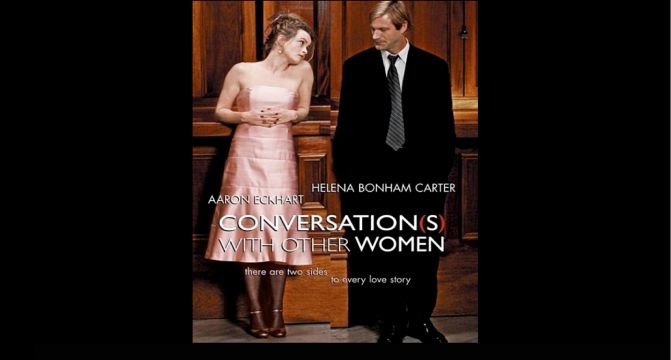 Conversations With Other Women

“In Conversations, Starr and Jeff pulled off a remarkable balancing act. We needed almost 30 minutes of diagetic music under constant dialogue at a wedding reception. They managed to compose music that perfectly fits the emotional beats of the scenes, underscoring the dialogue without “scoring” the action. And that music seamlessly moves up in the mix during the ‘last dance’ sequence, providing a melancholy and romantic conclusion to the wedding reception. In addition to reaching a powerful final result, the process of getting there with Starr and Jeff could not have been more fun and satisfying“ - Hans Canosa, director

Starring Golden Globe nominee Aaron Eckhart & Best Actress Oscar nominee Helena Bonham Carter and this intriguing and artful film directed by Hans Canosa tells the story of a man and woman who flirt with each other at a wedding reception, the sexual tension seems spontaneous, but is it? As they break from the party to a hotel room, the flirtation turns into a night filled with passion and remorse.  The interesting challenge to creating this score was to give it the feel that it was being played by an upper eastside NYC wedding band in the next room while punctuating and giving additional weight to the “conversations”.

Below is a review of the score from Goldenscores

Sometimes smaller independent films can have extremely interesting scores and Conversation(s) With Other Women was no exception, in fact it was a refreshing change to some of the drone material that has passed over my desk in recent weeks. The Hans Canosa directed film (his first feature) stars Helena Bonham Carter and Aaron Eckhart in a yet another romantic interlude that turns out to be not exactly what it appears on the surface. To make it even more intriguing Canosa uses a split screen for the entire picture!

Parodi and Fair created a wonderful jazz based score … lots of good jazz in the genre of Gil Evans and Miles Davis with a little dash of Bill Evans piano thrown in for good measure. Starr uses a 1928 Steinway which has a really nice tone to it and from what little I know about pianos the 28 model was still pre composite keys. The piano was once used in the Wizard of Oz film and it is still being put to excellent use today.

“Her Story” is written in the style of Killer Joe, a great jazz number letting guitar, piano, and sax each take their turns doing nice solo features. “Last Dance” conjures up Miles Davis with the muted trumpet along with guitar and piano. “Shirley Temple With Pineapple”, an award should go to it for one of the most unique track names, is in fact a country sounding quirky melody. “Where’s Your Daddy” is a nice combo number featuring the brass with a nice guitar solo. “Another Time” is a slow two stepper with guitar, trumpet and sax taking their turns on solos. The trumpet is another of those muted dreamy sounding Miles Davis solos. … “Fussy Headset” a big band number and “Lazy Guitar” another guitar based slow dance completes the selections.

In a way I hate to review and talk about material that might or might not get an official release. But in the case of this one my hopes are that it will be released so that all of you can enjoy the excellent material that Starr Parodi has to offer. For what my humble opinion is worth her jazz material would have sounded a lot better in Black Dahlia than what Isham offered us. Good stuff and I look for more from the duo in the future.

< TRANSFORMERS Rescue Bots
The Pageant Of The Masters >