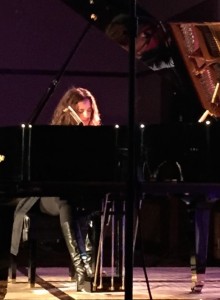 get your tickets here

Join us for an evening of inspiring solo piano, featuring  award-winning pianists, Starr Parodi, Christine Brown and Louis Landon! This is a casual and relaxing way to experience the beauty and power of live solo piano, each performing original music selections and telling the stories behind the music.

Steinway Recording Artist – Starr Parodi’s Solo Piano CD Common Places: piano improvisations, which echos with heartfelt neo-classical, americana, gospel and cinematic themes all played as “stream of consciousness” improvisations, has become an iconic touchstone on the landscape of solo piano recordings. Known for it’s passionate, intimate and ethereal piano improvisations Common Places was the winner of the inaugural Whispering’s Solo piano recording of the Year award in 2007. Mark Vail from Keyboard magazine had this to say about Common Places: “Parodi’s pianistic sense and delivery go way beyond creative. Words that come to mind while listening to Common Places include imaginative, courageous, dynamic, passionate, gutsy, pensive, restrained and euphoric. I’m thoroughly entranced by the whole experience”. Common Places was also lauded by KCRWʼs Chris Douridas: “This deeply passionate and beautiful recording (Common Places) is one of the best albums of the year.”

Starr, who recently accompanied Carole King on her Grammy nominated CD A Holiday Carole, has recorded with or accompanied a vast array of internationally treasured artists such as Celine Dion, Carlos Santana, Stevie Wonder, BB King and Ringo Starr will be playing works from both Common Places and her greatly anticipated upcoming CD The Heart Of Frida.

As a performer, Starr first garnered early national recognition as the late night pianist/keyboardist on the groundbreaking Arsenio Hall Show, she was invited to play at the Kennedy Center for the inauguration of President Clinton and was honored by Keyboard Magazine as one the most influential contemporary keyboardists.